Congratulations to Charlemont, Colrain, and Heath on becoming designated Green Communities! The three towns were recognized by State officials at a ceremony in Colrain on May 2. See the official press release from the Department of Energy Resources below. FRCOG staff provided technical assistance to the three towns with their designation efforts. To date, 24 of the 26 towns in Franklin County are Green Communities, with a total of over $5.4 million in grant funds awarded to Franklin County Towns through the program.

“We are proud to support the Green Communities program and the work it allows state and local governments to do in order to protect the environment and reduce greenhouse gas emissions through responsible clean energy policies,” said Governor Charlie Baker. “Cities and towns that participate in the Green Communities program have access to additional resources that help facilitate investments in energy efficiency and renewable energy projects while reducing energy costs and carbon footprints.”

“These towns are making tremendous strides to reduce energy consumption and save money and this grant funding is another step we are taking to provide cities and towns across the Commonwealth with the tools they need to continue to move Massachusetts forward as a leader in energy efficiency,” said Lieutenant Governor Karyn Polito.

Under the Green Communities Act, cities and towns must meet five criteria to be designated a Green Community and receive funding, including reducing municipal energy consumption by 20 percent over five years. The 30 newly designated Green Communities have committed to reduce their energy consumption by 293,936 MMBTUs in five years, energy use equivalent to heating and powering 2,281 homes, and greenhouse gas emission (GHG) reduction of 21,380 metric tons equivalent to taking 4,501 cars off the roads.

“Close collaboration between communities and the Commonwealth is a critical component of efforts to create a cleaner energy future by investing in renewable energy and energy efficiency,” said Energy and Environmental Affairs Secretary Matthew Beaton. “With today’s designation, the Green Communities program continues to prove an effective tool in collaborating with our municipal partners to reduce energy costs, consumption and emissions.”

“The Green Communities program is an important partnership with cities and towns to help them find clean energy solutions that reduce long-term energy costs and strengthen local economies,” said Department of Energy Resources Commissioner Judith Judson. “These grants represent another milestone for both the communities and the Commonwealth as we continue to collaborate to meet our shared energy goals.”

Under the Green Communities Act, DOER’s Green Communities Designation and Grant Program can provide up to $20 million annually to qualified cities and towns.  The goal of the Designation Grant Program is support communities’ investments in energy efficiency and renewable energy projects that further the clean energy goals determined by the designated communities.  Initial Designation Grants are based on a $125,000 base for each designated Green Community, plus additional amounts tied to per capita income and population, and for municipalities that provide as-of-right siting for renewable energy generation.

“I am pleased to see Charlemont, Colrain, and Heath be recognized for their efforts to promote green, renewable energy and mitigate the effects of climate change,” said State Representative Paul Mark (D-Peru). “Increasingly, we understand that our future relies on innovative solutions that foster energy efficiency and a diversified portfolio of renewables. The Green Communities designation helps local municipalities lead the charge towards much needed sustainable solutions and has my full support. Congratulations to these three communities on their efforts.”

Funding for these grants is available through proceeds from the Renewable Greenhouse Gas Initiative (RGGI) as well as Alternative Compliance Payments (ACP) paid by retail electric suppliers that do not meet their Renewable Portfolio Standard compliance obligations through the purchase of Renewable Energy Certificates.

A full list of projects funded by the Green Communities program can be found here.

We’re happy to announce the publication of the Franklin Regional Council of Governments 2018 Annual Report.  It contains a general summary of the many projects and services that the FRCOG provided last year to our rural region and the 26 member communities that make up Franklin County. 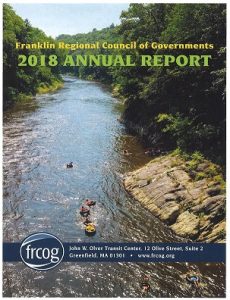 Our staff of 52 land use, transportation, economic development, emergency preparation, and public health planners; accountants; building, plumbing, wiring, and health inspectors; coalition organizers; administrators; a purchasing official; a public health nurse; and more, are proud of our many accomplishments and the breadth of our services.

Please don’t hesitate to contact us with any questions you may have about our work. We hope you will enjoy reading about our year!

You’ll find the report in the link below:

Join us on June 5th for the Franklin County Complete Count Committee Kick-off!

Next year, the U.S. Census Bureau will seek to count all residents of Franklin County as part of the 2020 Census. This decennial census is different from past years. For example, households will be asked for the first time to respond online, as opposed to filling out a paper form and mailing it. This Census data will be used to determine legislative districts and how federal resources are distributed for years to come. We need to ensure that the 2020 Census counts everyone!

The Franklin Regional Council of Governments (FRCOG) is forming the Franklin County Complete Count Committee to develop strategies and form partnerships to best prepare Franklin County households. If you would like to be part of this effort, please join us on Wednesday, June 5 at 3:00 pm in the 1st floor meeting room of the JWO Transit Center at 12 Olive Street, Greenfield, MA or contact Jessica Atwood at jatwood@frcog.org. For additional information about the upcoming census, please check out the “Census 2020, Make Yourself Count” factsheet from the NALEO Educational Fund (www.naleo.org/census2020).

In the coming year, FRCOG will lead the creation of the 2020 Comprehensive Economic Development Strategy (CEDS) Plan for Franklin County. To correspond with the creation and implementation of this new five-year plan, a new CEDS Committee is forming.  The new Committee will have up to 19 members, with seats representing geographic areas, regional economic development entities and at-large participants. If you or someone you know may be a good candidate to be on the CEDS Committee, please contact Jessica Atwood at jatwood@frcog.org or call 413-774-3167 x123. Click here for a CEDS Committee member role description.

The DRAFT 2019 Greater Franklin County Comprehensive Economic Development Strategy (CEDS) Annual Report  (PDF, 3.9 mb) is available for public review and comment. Please submit comments by no later than Monday, June 10, 2019 via email to jatwood@frcog.org or by phone at 413-774-3167 x123.  This is the fourth and final update to the five-year Greater Franklin County 2015 CEDS Plan (PDF file, 1.8 mb).  The planning process will begin in summer 2019 to develop a new five-year plan to be published in June 2020.