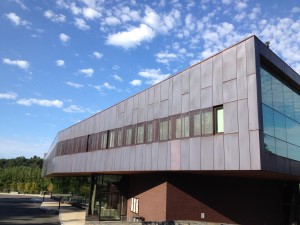 Rising up from the embankment at the southwestern tip of Greenfield’s Bank Row Urban Renewal District is the nation’s first net-zero bus station, the John W. Olver Transit Center. The award-winning building is the county’s transportation and government nucleus: it’s a stop on the intercity Peter Pan and Greyhound bus lines; houses the Franklin Regional Transit Authority (FRTA), which serves 40 communities in four counties; and is also home base for the Franklin Regional Council of Governments’ nearly 50 employees, who operate a regional planning department and the cooperative health and inspection programs, among many other county-wide services.

A sleek, eye-catching structure of copper and brick, the building symbolizes the region’s historical pride and revolutionary thinking. The Transit Center sits on the land once occupied by railroad tracks, a freight house, a locomotive house, and a steam engine turntable in the 1800s, but one glimpse of the structure makes it obvious that this building does not house business-as-usual. Naming the hub after the former US Representative Olver was a fitting salute to the man who not only secured the funding for the project, but advocated tirelessly for enhanced public transportation and stepped-up energy conservation for more than 20 years.

When first envisioning the Transit Center, designers at Charles Rose Architects and Arup Engineers embraced President Obama’s mandate that all Federal buildings attain “net-zero” energy consumption by the year 2030. To achieve a “net-zero” status, a building must annually produce all the energy it uses. While US buildings typically use 39% of the nation’s energy, 70 % of the electricity, and 38% of the carbon emissions, the Transit Center is designed to create and utilize its own power through such renewable energy innovations as geothermal wells and an industry – waste wood pellet boiler to heat the building’s air and water, solar arrays for electricity, “chilled beam” air conditioning, and occupancy sensor lighting, among others. State and local officials look to the Transit Center as a catalyst for downtown revitalization and to boost an awareness of the benefits of sustainability.

In December 2014, Amtrak restored the “Vermonter” service to its original route along the recently rehabilitated Connecticut River Rail Line, bringing passenger rail service back to Greenfield with a stop at the Transit Center. This service provides a crucial intercity transportation connection linking Greenfield with Springfield, MA; New Haven, CT; and New York City to the south; and St. Albans, VT; and Montreal, Canada to the north. The possibility of future commuter rail service running from the Transit Center to Northampton, Holyoke, and Springfield further enhances the importance of the facility in fostering economic development and sustainable, alternative transportation throughout the Pioneer Valley.

Green Is as Green Does at the FRCOG

Entering the Franklin Regional Council of Governments office on the 2nd floor of The John W. Olver Transit Center for the first time, visitors are often quite taken by the space’s unique combination of beauty, practicality, and sustainability. The building is certainly striking, inside and out, appearing to be both highly contemporary, yet somehow conventional.

This impression is not so surprising, as Charles Rose architects chose traditional building materials — local stone, copper, and brick — in homage to the courtly, imposing brick buildings that line the Main streets of Greenfield— while also imparting in the building’s form the fluidity of the buses that slip in and out of the depot and the very the hills rolling behind it to the west.

While saluting a traditional building style, these materials were primarily chosen for the properties they lend to the goal of net-zero consumption.  It stretches along the reddish brown façade, unpredictable spatterings of bricks are left out, creating a kind of screen which helps manage the building’s exposure to the sun and regulates the heat entering the building in summer.  These are just a few of the many details which contribute to the building’s energy-saving prowess.

Visitors to the Council offices have come to recognize its establishment as the heralding of a new green way of building, which for the employees of the FRCOG, also translates into a new way of doing.