Please click HERE for information on vaccinations in Franklin County.

In response to COVID-19, FRCOG offices are closed. Staff are working remotely. Email is likely the most efficient way to reach us. You can find our contact information on the Staff page under the About link below.

The Town of Warwick, in collaboration with the Town of Northfield and with assistance from the Franklin Regional Council of Governments, is seeking to become designated as a Municipal Vulnerability Preparedness (MVP) community through the MA Executive Office of Energy and Environmental Affairs’ (EEA) MVP Program. Two Community Resilience Building workshops were held virtually in February and March to discuss impacts of climate change on Warwick, identify Warwick’s top hazards of concern, review the Town’s current strengths and vulnerabilities, and begin brainstorming action items to increase resiliency in three categories – infrastructure, society, and environment. Links to the workshop presentations are below: 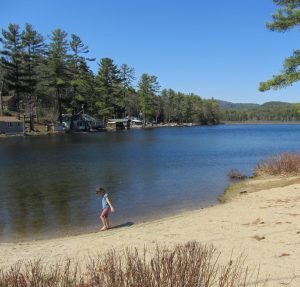 By becoming a designated MVP community, Warwick will be eligible to apply for MVP Action Grants to pursue identified action items. The result of the two workshops is a draft summary matrix outlining strengths, vulnerabilities, and potential action items:

Warwick needs resident and stakeholder input on the draft action items – what should be Warwick’s top priorities to address vulnerabilities and build upon strengths? What actions are missing? Please fill out THIS SURVEY by Sunday, April 11!

Your input will be used to prioritize actions in Warwick’s final MVP Plan. A public listening session will be held in May to present the final plan, date TBD.

This is a joint project with the Town of Northfield. For more information about Northfield’s MVP progress, please see this summary document, or go to the Northfield Town website.

Geared towards officials, volunteers and employees in small and rural towns in Western Mass, the conference has been redesigned as a weekly virtual series that will engage participants in discussion and problem solving around the development of affordable housing in the region.

Registration is free but you must register in advance for EACH session you’d like to attend. Please go to https://www.mhp.net/community/events to register. Contact Katie Bosse at kbosse@mhp.net or 857-317-8517 for more information about this or any other MHP-sponsored events.

Pathways to Homeownership in Western Mass

A full agenda will be made available by the end of February.

All training materials will be provided electronically before the event.

Contact Katie Bosse at kbosse@mhp.net or 857-317-8517 for more information about this or any other MHP-sponsored events.

Buckland Green Streets is a project initiated by the Franklin Regional Council of Governments (FRCOG) with funding from a MassDEP 604b grant to assess the potential for Green Infrastructure (GI) stormwater management in Shelburne Falls on the Buckland side.  The goals of the project are to improve water quality in the Deerfield River, to help the village and surrounding watershed become more resilient to increasingly frequent and intense precipitation, and to mitigate the flood hazards resulting from heavy rain events. FRCOG staff worked with the Town Highway and Wastewater Superintendents to develop a stormwater management concept for Crittenden Hill Road where GI can be implemented in conjunction with planned municipal road work currently needed to repair the road and address erosion hazards that threaten residential properties and steep slopes flanking the road.  The concept proposes to retrofit and utilize an abandoned water tank and implement a new bioretention basin to capture and clean large volumes of stormwater before it enters the storm sewer and outlets to the Deerfield River. This concept design will be developed to 25% with cost estimates by a Professional Engineer.  FRCOG will also develop a guide for the Town to continue to integrate GI in its future transportation projects, including an assessment method and links to design and funding sources that will serve as a resource for other towns.

For more information please check out the presentation below, or contact Helena Farrell, Land Use and Natural Resources Planner, at HFarrell@frcog.org or 413-774-3167 ext. 134.

Many culverts and bridges are aging, undersized and in need of repair or replacement. Replacing them with structures that meet the current design standards can lead to safer, lower maintenance and more storm resilient roadways. However, securing funds to pay the upfront costs for these upgrades is a challenge for many municipalities. This forum will discuss some of the funding programs that can be used to help implement replacements and upgrades of culverts and small bridges.

Select the link below for more information.

The goal of the Rivers & Roads Training Program is to advance an understanding of fluvial geomorphology across the transportation sector, to ultimately develop and implement projects that improve the resiliency of the Commonwealth’s transportation network.

Target Audience: Anyone who manages, plans, designs or builds roadway infrastructure around rivers and streams.

The workshops are FREE but require registration. For information on how to register and locations and dates of workshops, please see the below links:

Over the last 10 years, FRCOG has been using the science of Fluvial Geomorphology to develop and pilot cost-effective, sustainable river and watershed assessment, restoration and management techniques in the Franklin County portion of the Deerfield River Watershed.  Historic land clearance and the legacy of channel modification are two of the main stressors still affecting the rivers and streams in this watershed. Continued development and encroachments in the river corridor, along with the more frequent and intense rain events due to climate change, also stress these unstable river systems.

The Toolkit can be used by state agency staff, communities and landowners in the Deerfield River Watershed and across the Commonwealth who are interested in river restoration and protection, climate resilient land use, and the reduction of threats to critical infrastructure caused by increasingly severe and frequent flood events.  More Information:  Kimberly Noake MacPhee at kmacphee@frcog.org or ext. 130.

Leverett was recently awarded $50,000 from the DER’s Culvert Replacement Municipal Assistance (CRMA) Grant Program to conduct field data collection and analysis, design and engineering, and permitting for the replacement of a culvert on a tributary to Roaring Brook, a coldwater fishery.  Upgrading the culvert eliminates the risk of collapse, protecting infrastructure and access between Amherst and Routes 202 and improving fish and wildlife passage. The CRMA program is designed to help communities replace existing culverts with structures that will be more flood resilient and meet the Massachusetts Stream Crossing Standards.  Please contact Brian Kelder (brian.kelder@mass.gov, 617-626-1541) for more information. 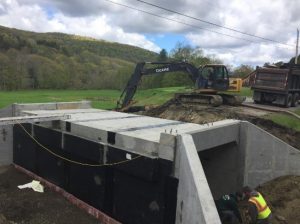 Congratulations to Charlemont, Colrain, and Heath on becoming designated Green Communities! The three towns were recognized by State officials at a ceremony in Colrain on May 2. See the official press release from the Department of Energy Resources below. FRCOG staff provided technical assistance to the three towns with their designation efforts. To date, 24 of the 26 towns in Franklin County are Green Communities, with a total of over $5.4 million in grant funds awarded to Franklin County Towns through the program.

“We are proud to support the Green Communities program and the work it allows state and local governments to do in order to protect the environment and reduce greenhouse gas emissions through responsible clean energy policies,” said Governor Charlie Baker. “Cities and towns that participate in the Green Communities program have access to additional resources that help facilitate investments in energy efficiency and renewable energy projects while reducing energy costs and carbon footprints.”

“These towns are making tremendous strides to reduce energy consumption and save money and this grant funding is another step we are taking to provide cities and towns across the Commonwealth with the tools they need to continue to move Massachusetts forward as a leader in energy efficiency,” said Lieutenant Governor Karyn Polito.

Under the Green Communities Act, cities and towns must meet five criteria to be designated a Green Community and receive funding, including reducing municipal energy consumption by 20 percent over five years. The 30 newly designated Green Communities have committed to reduce their energy consumption by 293,936 MMBTUs in five years, energy use equivalent to heating and powering 2,281 homes, and greenhouse gas emission (GHG) reduction of 21,380 metric tons equivalent to taking 4,501 cars off the roads.

“Close collaboration between communities and the Commonwealth is a critical component of efforts to create a cleaner energy future by investing in renewable energy and energy efficiency,” said Energy and Environmental Affairs Secretary Matthew Beaton. “With today’s designation, the Green Communities program continues to prove an effective tool in collaborating with our municipal partners to reduce energy costs, consumption and emissions.”

“The Green Communities program is an important partnership with cities and towns to help them find clean energy solutions that reduce long-term energy costs and strengthen local economies,” said Department of Energy Resources Commissioner Judith Judson. “These grants represent another milestone for both the communities and the Commonwealth as we continue to collaborate to meet our shared energy goals.”

Under the Green Communities Act, DOER’s Green Communities Designation and Grant Program can provide up to $20 million annually to qualified cities and towns.  The goal of the Designation Grant Program is support communities’ investments in energy efficiency and renewable energy projects that further the clean energy goals determined by the designated communities.  Initial Designation Grants are based on a $125,000 base for each designated Green Community, plus additional amounts tied to per capita income and population, and for municipalities that provide as-of-right siting for renewable energy generation.

“I am pleased to see Charlemont, Colrain, and Heath be recognized for their efforts to promote green, renewable energy and mitigate the effects of climate change,” said State Representative Paul Mark (D-Peru). “Increasingly, we understand that our future relies on innovative solutions that foster energy efficiency and a diversified portfolio of renewables. The Green Communities designation helps local municipalities lead the charge towards much needed sustainable solutions and has my full support. Congratulations to these three communities on their efforts.”

Funding for these grants is available through proceeds from the Renewable Greenhouse Gas Initiative (RGGI) as well as Alternative Compliance Payments (ACP) paid by retail electric suppliers that do not meet their Renewable Portfolio Standard compliance obligations through the purchase of Renewable Energy Certificates.

A full list of projects funded by the Green Communities program can be found here.