In response to COVID-19, FRCOG offices are closed. Staff are working remotely. Email is likely the most efficient way to reach us. You can find our contact information on the Staff page under the About link below.

Building, plumbing and wiring inspectors are responding to emergencies only.

All meetings, workshops and forums are cancelled or have been changed to a call-in or video format.  Please look for emails from FRCOG staff about specific meetings or on our calendar at the Meetings and Events link below.

The Franklin County Multi-Agency Coordination Center (MACC) has opened, at the Greenfield Emergency Operations Center to help serve the response needs of Franklin County communities during the COVID-19 pandemic response. The MACC is staffed weekdays by trained local personnel who have extensive knowledge of the county.

During this emergency, the MACC will be a resource for all county towns, regardless of whether they signed the original Memorandum of Understanding. Upon request the MACC can assist with resource coordination, situational awareness and planning support.

The primary goal of the MACC is to create a common operating picture across the 26 towns in Franklin County, as information sharing is so critical. Starting April 6, the MACC will send situation awareness reports weekly on Tuesday and Friday, and more often, if needed.

PLEASE NOTE: The MACC does not have any personal protective equipment on hand. PPE requests should continue to be made directly to MEMA through WEBEOC.

As of July 1st, the Regional Preparedness Program no longer coordinates the Franklin County Citizen Corps. In order to create a more robust team of volunteers, the Berkshire Regional Planning Commission and Fairview Hospital agreed to oversee both the Berkshire and Franklin County Medical Reserve Corps (MRC) units. These units will plan together, train together, and exercise together to create one larger team with two geographic foci. Please reach out to Corinne McKeown at Fairview Hospital for more information.

We wish our Citizen Corps coordinator, Robert Quinn-O’Connor a happy and relaxing summer and say thank you for taking such good care of our volunteers for the last five years.

The Western MA Health & Medical Coordinating Coalition participated in a tabletop exercise on April 25th testing the MA Dept. of Public Health’s new Patient Placement Coordination Plan. Following federal requirements, the Department had to practice moving at least 20% of western Mass’ hospital patients from sending hospitals to receiving hospitals. The scenario involved flooding that required Cooley Dickinson Hospital and Baystate Medical Center evacuating all of their patients and sending them to the remaining eight hospitals in the region. 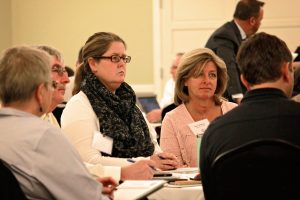 Staff from the MA Dept. of Public Health Office of Preparedness and Emergency Management test out the State’s new Patient Placement Coordination Plan 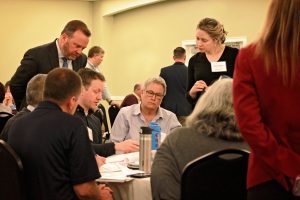 Exercise facilitators from the Harvard T.H. Chan School of Public Health look on as Mary Clark, former MA Dept. of Public Health’s director of the Office of Preparedness and Emergency Management tests the statewide plan to handle hospital evacuations 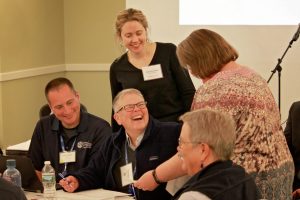 A moment of laughter amid the chaos of practicing the movement of over 1,100 patients from two hospitals to the other eight in western MA. 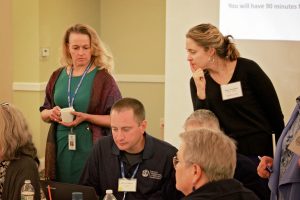 Hmmmm…are you sure about that Michael? Michael Nelson, regional public health coordinator for the MA Dept. of Public Health’s Office of Preparedness and Emergency Management and Montague selectman,helps determine how many beds are available to handle incoming hospital patients.

Regional Preparedness Program Manager Tracy Rogers assisted Conway in recovering from the tornado that struck the town on February 25th. Tracy first served in a volunteer capacity in her role as interim deputy team leader on the Northwest Massachusetts Incident Management Team. Later, in her FRCOG role, Tracy worked with town officials to write an after action report and improvement plan assessing how well the town responded and suggesting planning and training opportunities to improve future responses.

Though the majority of states scored a 6 out of 10 or lower in the Trust for America’s Health’s report on Health Emergency Preparedness, Massachusetts scored 10 out of 10! Massachusetts has been recognized by the Trust as the most prepared state in the nation when it comes to preventing, responding to, and recovering from public health emergencies such as disease outbreaks, bioterrorism, and natural and manmade disasters. 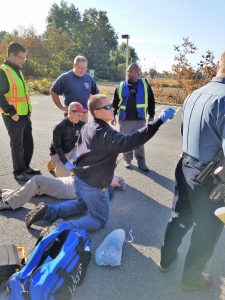 Firefighters treat an unconscious victim of a spill of an unidentified liquid.

and track resources according to their respective regional hazardous materials emergency response plans, establish communications between agencies and communities, protect the crime scene, evaluate evacuation options and methods to notify residents of the evacuation, and determine how to handle the press all while dealing with a constantly changing direction of the wind. Experienced fire chiefs mentored their captains and lieutenants as they navigated not only the hazmat incident, but also being in command of their peers. 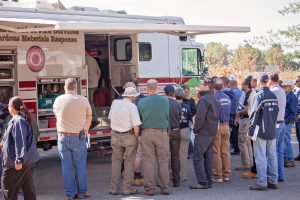 Participants get a tour of the regional hazmat team vehicle.

The after action report indicates a few areas where the two counties could improve their response capabilities through training opportunities, such as how to use the Emergency Response Guidebook, higher level incident command system and officer training, how to write and follow a communications plan, and how to handle press inquiries. It also lists several strengths, including sizing up a hazmat scene, protecting the integrity of the scene, and leveraging many forms of communication to notify residents of the need to evacuate. 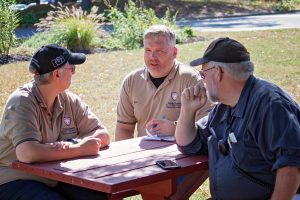 Staff from the FRCOG consult with the co-chair of the Hampshire County REPC on how the exercise is progressing.

This was the first joint effort between the two REPCs and is likely to inspire future efforts together to get us more bang for our buck.

The Franklin and Hampshire County Regional Emergency Planning Committees will jointly sponsor a full scale hazmat exercise in Hatfield on September 17. Meet members of the District IV HazMat Team, practice sizing up a hazmat incident, operating under unified command, and communicating across county lines. For more information, or to register, click here.

The Franklin County Regional Emergency Planning Committee (REPC), with support from the Western Region Homeland Security Advisory Council, has been working on a project to bring a multi-agency coordination center (MACC) to Franklin County. The MACC will augment local emergency management staff by providing a robust emergency operations center ready to support local emergency management directors. If a response calls for more resources than a single town has within its borders, volunteers working at the MACC will assist in obtaining resources from other Franklin County towns before forwarding that request up to MEMA to access state resources. Situational awareness gathering and dissemination by the MACC will help to establish a better common operating picture for those communities in the midst of the disaster and for their neighboring communities.

A small working group of volunteers from the REPC has been researching different physical locations to house the MACC, which includes the Sheriff’s Office and Greenfield Community College. Discussions about sustainable funding and sustainable staffing are still taking place.

The MACC concept has received a thumbs up from the Franklin County Fire Chiefs Association and will go before the REPC for formal adoption during its April 4th meeting. REPC staff will be visiting emergency management directors and selectboards throughout the county in the coming months to explain the project and invite communities to sign a memorandum of understanding agreeing to use the MACC during future large-scale emergencies. For more information, please contact Dan Nietsche, emergency preparedness coordinator.

The Franklin County Emergency Communications System Oversight Committee has created a Radio System Trouble Ticket to alert the system manager of issues with the system. See the Committee’s webpage for more details.