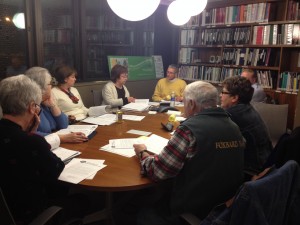 The Finance Committee is made up of Council members assigned by the Council Chair. The Committee is responsible for creating and overseeing the FRCOG annual operating budget and related functions.

For upcoming meeting agenda, click on name of meeting next to date and time to the right.

Budget development has begun for FY21!  The FRCOG Finance Committee and Council use the The FRCOG Fiscal Review to closely examine the agency’s FY19 budget, to highlight any significant changes in the current (FY20) budget, and to project programmatic and financial conditions and needs as they begin drafting the budget for the FY21. That budget-building document can be found at the following link:

The FRCOG Council will vote on the budget recommended by the Finance Committee on January 30, 2020, at 5:30 p.m.

After months of working with FRCOG Finance Department staff assessing programmatic, agency-wide, and town needs, the Finance Committee recommended the FY20 budget to the Council on January 24, 2019. That night the Council adopted the the budget making it the plan of record for the coming year. Fiscal year 2020 began July 1, 2019. The adopted budget and the Fiscal Review for FY20 Budget Development can be found below, along with the FRCOG Program Updates, which includes a section summarizing the committee’s budget presentation.